Business in India is growing at a rate faster than ever before and expectations are soaring high on India becoming more and more business-friendly. However, the problem of increasing litigation pendency is looming large and becoming a major drawback in doing business in the country. In 2015, the World Bank Doing Business group has ranked India at a poor 186 out of 189 economies, on the parameter of “Enforcing Contracts”, with average time taken and cost incurred for the process listed as 1420 days and 39.6% of the claim respectively. While these figures are alarming, it is also true that the economy is growing, with a 7.5% gross domestic production in the last quarter and an overall rise in the growth of investment, as reported in the February 2015 issue of Forbes. This may lead to a logical conclusion that despite the low ranking, the optimism towards business is generally working in favor of doing business in India, more so with the law-makers and sectoral regulators also doing their bit by moving on from being problem-pickers to problem-solvers However, the real question that becomes pertinent here is whether the judiciary is being able to match up to this heightened pace and the answer to that may be somewhat grim, with reports suggesting that more than 31.3 million cases are pending in various Courts in India and the Supreme Court alone is struggling with a backlog of 61,300 civil and criminal cases as per data available till 1 March 2015 (source: click here). 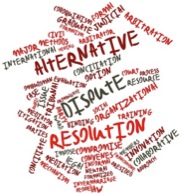 It is in this context that we bring forth a series of three posts with an aim to address some of the following issues:-

The idea is to present a comparative analysis of the ADR model in India. Alternative dispute resolution or a method of resolving disputes other than by litigation is not new in India as a means to achieve out-of-Court solutions. Arbitration Act was first introduced in India in the year 1899, although informally ADR has been in practice in India since a much longer period and we find references to it in the ancient texts of Manusmriti, Arthashashtra and the Mahabharata. However, the Arbitration Act, 1940 is the first enactment that amended and consolidated the law relating to arbitration in British India and this remained a comprehensive law on arbitration even in the post-independence phase until 1996. To keep pace with the globalization of commerce the Indian legislators replaced the 1940 Act with the new Arbitration and Conciliation Act, 1996. However, despite all these, the problem of increasing litigation pendency hardly ever lost momentum. It is important to understand that disputes, as a conflict or controversy related to the assertion of a right or claim, can be of a varied nature and not all of them are required to be taken through the complex nitty-gritty of the judiciary. The Indian law-makers have not been slow in identifying this. Depending on the suitability or rigor that each dispute may require, the legislature has provided for settlement of matters concerning the family under Order XXXIIA of the Code of Civil Procedure, 1908 (“CPC”) . The Lok Adalat system has been given legal sanctity by enacting the Legal Services Authority Act in 1987 and also by introducing Section 89 in the CPC. The Consumer Forum, the Company Law Board, the Competition Commission and several other forums have been put into action for dealing with specific types of disputes, with due regard to their particular nature and requirements. However, the only ADR model that has been in focus so far is arbitration and the efficacy of the same in the Indian legal system is something that has become one of the most interesting topics of debate in the legal academia today. To mention at a very high level, questions are arising pertaining to the cost and time effectiveness of the process and the need of making the process so highly akin to the actual judicial process. Given this backdrop, we look forward to a holistic discussion in our next posts on the suitability, pragmatism and the need for modifications in the current Indian ADR model.